There is no more pressing question in the storm of legal issues swirling around the Russia scandal than whether Donald Trump can pardon himself.  The answer is that he probably cannot, but if he tries it would plunge America into a full-blown constitutional crisis that his presidency probably could not survive.

Trump showed his hand over the weekend in tweeting (what else?): “While all agree the U.S. President has complete power to pardon, why think of that when only crime so far is LEAKS against us.  FAKE NEWS.”

No president has ever sought to pardon himself, not even Richard Nixon as the bloodhounds were closing in on him in the final days of the Watergate scandal.  While the Constitution does not address the issue and no court has ever ruled on it, anyone exempting themselves from criminal liability — even or perhaps especially the president — would violate America’s basic rule-of-law values.

Trump, of course, has never let values and norms, legal or otherwise, get in his way. But a self pardon would set up a sort of circular firing squad scenario whereby:

The Republicans who control Congress would again voice the usual ad hominem concerns, but make no meaningful move toward initiating impeachment proceedings because that would further threaten their stalled legislative agenda.

A criminal suit almost certainly would then be filed against Trump by the Democratic leadership or another entity with legal standing, an action that the Supreme Court had ruled was legal but in a rather different context — Paula Jones’s civil suit against Bill Clinton.

A criminal suit almost certainly would be stayed by the courts — and most certainly by the Supreme Court — because of the prevailing view that a sitting president can’t be the subject of a criminal action until he is impeached and removed from office.

The two important things to note here are that the battle over a self-pardon would be fought at the highest levels of Congress and not the courts because of the extraordinary presidential protections the Founding Fathers enshrined in the Constitution.  And we’re talking about an incipient constitutional crisis, which is to say there is a threat to our democracy because of abuses of presidential authority and legitimacy (a la Nixon) that have no obvious solution.

A president also has extraordinary powers to order — and terminate — investigations.

This Trump did in firing FBI Director James Comey and seems likely to do again with Robert Mueller, who was named special counsel after Comey was axed.  The cost to Trump by firing Mueller would be dear because of the seismic fallout in general, the possibility it would stir congressional Republicans from their slumber, and probability that Deputy AG Rod Rosenstein, who appointed Mueller, and several other Justice Department officials would quit in protest.

Comey was and Mueller is getting too close to Trump, his family and associates for his comfort.  What is making the kleptocrat-in-chief especially angry is that the special counsel regulation (it’s not a law) allows Mueller wide latitude beyond investigating Russian election interference.

He can subpoena documents (including tax returns), file criminal charges against Trump’s family members and associates, and refer evidence (including the voluminous evidence of obstruction of justice already accumulated) for use in impeachment proceedings.  There also are indications that Mueller is ranging far afield from election interference.

Once such instance is picking up the investigation led by Trump-fired U.S. Attorney Preet Bharara into money laundering by Russians, including Prevezon Holdings, a company with which son-in-law Jared Kushner has done a few hundred million dollars worth of business and is represented by Natalia Veselnitskaya, the Russian attorney who met with Donald Trump Jr. in June 2016 after he infamously declared in an email “If it’s what you say I love it” when told she had Russian government-provided dirt on Hillary Clinton.

But the biggest takeaway is that a self-pardon might not be challengeable until after Trump leaves office in 2020 or whenever.

Or as University of Michigan law professor Richard Primus nicely put it in an essay in Politico, “an attempted self pardon would be like an umbrella that hasn’t been taken out in the rain.  We don’t know yet whether it works, or how well.” 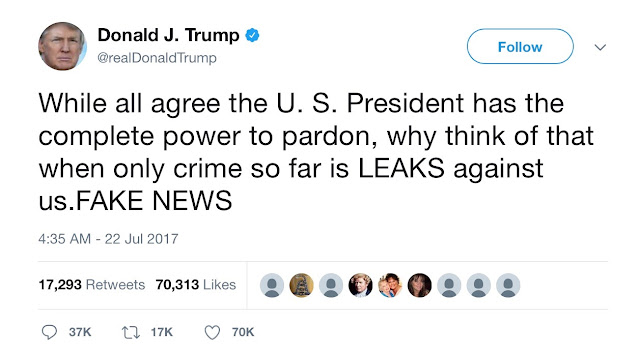 It also should be remembered that there is a long tradition in American politics of presidents not prosecuting their predecessors and ranking members of their administrations.

A fairly recent example is Barack Obama’s refusal to go after George W. Bush and the other architects of his torture regime for war crimes, while Trump chose not to prosecute Clinton for those infamous missing emails and unproven claims of Democratic collusion with Russia despite bloviating about that incessantly as a candidate and most recently as this week in a tweet criticizing AG Jeff Sessions for not going after Clinton and recusing himself from investigations into Russian interference in the 2016 election.

(Trump also has falsely claimed that Bush told his AG to investigate Al Gore for his “crimes” and Obama told his AG to prosecute John McCain, both rather pathetic efforts to divert attention from his myriad self-inflicted woes.)

But norms being norms, an argument can be made that even war crimes and certainly missing emails pale in comparison to Trump’s campaign colluding in a Vladimir Putin-orchestrated plot to undermine the bedrock of American democracy by sabotaging Clinton’s campaign, which ups the ante considerably if Trump’s successor is a Democrat.

There also is the possibly of lightning striking.

This would take the form of a sufficient number of Republicans in Congress actually taking their constitutional duty seriously for a change and declaring “enough is enough” if Trump self pardons, viewing that action as a reason to impeach rather than a shield against prosecution.  They also could reinstate the old independent counsel law, naming a special prosecutor who couldn’t be fired by Trump, but neither I nor the British bookies who rate the odds of Trump completing his term at less than 50 percent are holding our breaths over either of those things happening.

Then there is the thorny matter of Trump preemptively pardoning family members and associates implicated in the scandal, which his criminal defense team is said to be exploring along with the ramifications of a self pardon.

Based just on what we know — and there’s a lot we don’t know — Kushner, Trump Jr. and disgraced former Trump national security adviser Michael Flynn are in heaps of trouble. Only somewhat less so are former campaign manager Paul Manafort, campaign adviser Carter Page and dirty trickster Roger Stone.  I also suspect daughter Ivanka, who is Kushner’s wife, is not out of the woods.

Besides which, adds Sugerman, “We don’t live in Rome even if the Latin sounds wicked smart.”

Editor’s Note: This essay originally appeared on July 25, 2017, on Kiko’s House, a website featuring commentary by journalist and author, Shaun Mullen.  It was reproduced here with the consent of Mr. Mullen.

Google’s unofficial motto, “Don’t Be Evil,” surely qualifies as one of the most risible of its kind.  The admonition seems better suited for a fortune cookie than one of the world’s most ruthlessly aggressive companies.  But there it is, a monument to corporate claptrap. END_OF_DOCUMENT_TOKEN_TO_BE_REPLACED