The business-oriented media are loudly proclaiming that president-“elect” Donald Trump’s proposed tax cuts for the rich and corporations will “boost” the economy.

The word filters down to the local media: (The exact word: “boost”…)

Really? Is THAT what happens when taxes are cut for the wealthy and their corporations?

Presidents Reagan and both Bushes cut taxes for the rich and their corporations, promising that the “benefits” would “trickle down’ to the rest of us.  Kansas gave huge tax cuts to corporations and the wealthy to “boost” investment and jobs. For decades Puerto Rico offered tax breaks “attract businesses.”  How’d that work out for them — and us?

Sam Brownback took office as Governor of Kansas in 2011.  With a Republican legislature Kansas conducted a “real live experiment” and dramatically cut tax rates on the wealthy and corporations.  They said it would boost investment and create jobs.  They said the “boost” in the economy would actually increase tax revenues.

How did that work out? Not so great.  The LA Times reports, Hard times for Kansas and its schools as economic ‘experiment’ creates gaping budget hole,

In February 2015, three years into the supply-side economics experiment that would upend a once steady Midwestern economy, a hole appeared in Kansas’ finances.

To fill it, Governor Sam Brownback took $45 million in public education funding.  By April of this year, with the hole at $290 million, Brownback took highway money to plug it.  A month later, state money for Medicaid coverage went into the hole, but the gap continued to grow.

Today, the state’s budget hole is $345 million and threatens the foundation of this state, which was supposed to be the setting for a grand economic expansion but now more closely resembles a battleground, with accusations and lawsuits flying over how to get the state’s finances in order.

The Center for Budget and Policy Priorities (CBPP) took a long look at the Kansas experiment and what happened, and reported in Kansas’ Tax Cut Experience Refutes Economic Growth Predictions of Trump Tax Advisors,

In fact, the tax cut failed to boost the Kansas economy:

● The state’s economy has grown less than half as fast as the national economy; Kansas’ gross domestic product (GDP) grew 4.8 percent from the end of 2012 through the first quarter of 2016, while national GDP rose 11.9 percent.

● Kansas’ share of newly opened business establishments in the United States has actually declined slightly rather than increased.

But wait, there’s more.  According to CBPP, “Moreover, the Kansas tax cut package has had a deleterious impact on the state’s financial stability and the provision of critical services.”  Tax revenues did not grow as promised, they continue to decline as the state’s economy collapses.  The resulting reduction in infrastructure funding is hitting roads, etc.,  The state’s bond rating has been downgraded — twice — so the state has to pay higher interest rates.  Economic growth and job growth is slower than much of the rest of the country.

Puerto Rico offered “competitive tax rates” to corporations, in an effort to boost their economy.  How did that turn out?

In trying to be attractive to U.S. firms, Puerto Rico instead

The industrialization push, dubbed Operation Bootstrap, rested on the premise that manufacturers lured by tax breaks would spur the development of a local economy because they would need local suppliers.  The federal government supported the effort, viewing Puerto Rico as a vital capitalist outpost in the Caribbean became indentured to them, pledging tax breaks and cheap labor for ultimately transient economic benefits.

… It turned out that the manufacturers were generally locked into global supply chains, and so they had limited impact on local business creation.

The economic nosedive started in 2006, at the end of a 10-year phase-out by U.S. congress of tax breaks that had brought manufacturers to the island. Plant closures and job losses followed.  Puerto Rico’s commonwealth government made things worse by taking on years of debt to replace the lost revenue.

Tax cuts didn’t work out so well for Puerto Rico, either.

Studies: Tax Cuts Do Not “Boost” The Economy

Republicans always argue that tax cuts for the rich and their corporations will “boost” the economy because “taxes take money out of the economy” and the promise that by cutting taxes at the top the “job creators” have more of an “incentive” to work “harder.”  They even argue that cutting taxes actually increases tax revenue as a result of that “boost” in the economy.

So what’s the record?

In September 2012 the Congressional Research Service published a report that looked at 65 years of tax cuts and the economy, Taxes and the Economy: An Economic Analysis of the Top Tax Rates Since 1945.  From that report,

Throughout the late-1940s and 1950s, the top marginal tax rate was typically above 90%; today it is 35%.  Additionally, the top capital gains tax rate was 25% in the 1950s and 1960s, 35% in the 1970s; today it is 15%.  The real GDP growth rate averaged 4.2% and real per capita GDP increased annually by 2.4% in the 1950s.  In the 2000s, the average real GDP growth rate was 1.7% and real per capita GDP increased annually by less than 1%.  There is not conclusive evidence, however, to substantiate a clear relationship between the 65-year steady reduction in the top tax rates and economic growth.  Analysis of such data suggests the reduction in the top tax rates have had little association with saving, investment, or productivity growth.  However, the top tax rate reductions appear to be associated with the increasing concentration of income at the top of the income distribution.

What all those words say is as tax cuts took effect the economy slowed and longer term it slowed more.  They didn’t conclude this was causal, but clearly tax cuts didn’t “boost” growth.  The kicker: tax cuts were associated with wealth concentrating at the top.

So no, tax cuts didn’t “boost” growth at all and possibly cut growth while making income inequality worse.

The defining economic policy of the last decade, of course, was the Bush tax cuts.  President George W. Bush and Congress, including Mr. Ryan, passed a large tax cut in 2001, sped up its implementation in 2003 and predicted that prosperity would follow.

The economic growth that actually followed — indeed, the whole history of the last 20 years — offers one of the most serious challenges to modern conservatism.  Bill Clinton and the elder George Bush both raised taxes in the early 1990s, and conservatives predicted disaster.  Instead, the economy boomed, and incomes grew at their fastest pace since the 1960s.  Then came the younger Mr. Bush, the tax cuts, the disappointing expansion and the worst downturn since the Depression.

From my December 2010 post, Do Tax Cuts Help The Economy,

It is obvious that the Reagan and Bush tax cuts for the wealthy have hurt us in many ways.

But this was the plan all along, wasn’t it?

The April, 2011 post, Conservative Tax Tricks – Did Tax Cuts Grow The Economy? is full of charts and figures, including this: 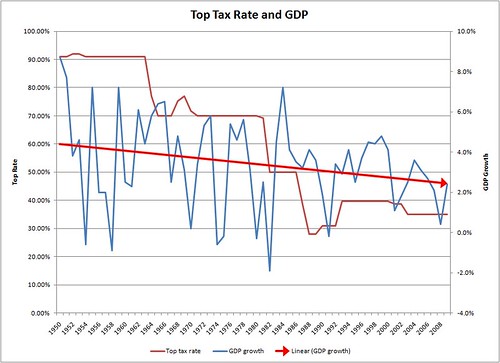 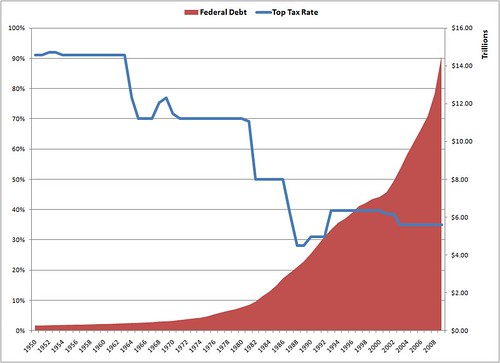 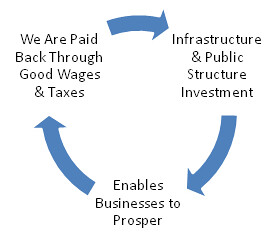 A beneficial cycle: We invest in infrastructure and public structures that create the conditions for enterprise to form and prosper.  We prepare the ground for business to thrive. When enterprise prospers we share the bounty, with good wages and benefits for the people who work in the businesses and taxes that provide for the general welfare and for reinvestment in the infrastructure and public structures that keep the system going. 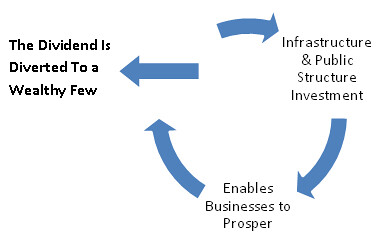 Since the Reagan Revolution with its tax cuts for the rich, its anti-government policies, and its deregulation of the big corporations our democracy is increasingly defunded (and that was the plan), infrastructure is crumbling, our schools are falling behind, factories and supply chains are being dismantled, those still at work are working longer hours for fewer benefits and falling wages, our pensions are gone, wealth and income are increasingly concentrating at the very top, our country is declining.

Tax Cuts Hurt We the People

The record proves that tax cuts don’t “boost” the economy, they just make the rich even richer.  So why do we keep getting told they will?

Tax cuts make the rich richer and hurt the rest of us because they force budget cuts in things that make our lives better and actually do grow the economy, like infrastructure and education.  A prosperous economy with good businesses and good jobs and good wages result from good education and the business conditions created by good infrastructure, research, etc.  These things take investment and regulation and those are the result of taxes and strong government.

If you cut taxes and wages to offer a “competitive environment” what happens is companies move from somewhere else, government there collects less in taxes, government in the new location collects less in taxes, the workers there get laid off and the new workers are always paid less — sometimes much less.  If you do the math, you see that in the larger picture of an economy — one that includes the places the companies moved from and moved to — overall wages drop so the public in general is poorer, government is weakened so it can’t help and invest.  In the end, the owners of the companies have a larger share of the pie.

Tax cuts are a scam to weaken democracy and our government’s ability to fight corporate power and concentrated wealth.

Editor’s Note: This essay originally appeared at Campaign for America’s Future (CAF) at their Blog for OurFuture.  It also appeared on January 20, 2017 on Seeing the Forest, a website featuring commentary by Dave Johnson, frequent public speaker and talk-radio guest and a leading participant in the progressive blogging community.  It was reproduced here with the consent of Mr. Johnson.

Google’s unofficial motto, “Don’t Be Evil,” surely qualifies as one of the most risible of its kind.  The admonition seems better suited for a fortune cookie than one of the world’s most ruthlessly aggressive companies.  But there it is, a monument to corporate claptrap. END_OF_DOCUMENT_TOKEN_TO_BE_REPLACED